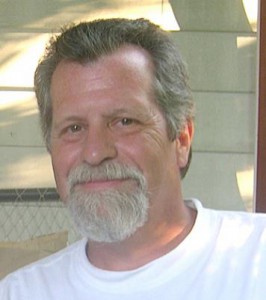 I grew up in a family where just about everyone could draw and paint.  My original inclinations were toward architecture and aviation. My father was my main inspiration as he was always drawing something. He later became a professional golfer; which got him out of the steel mills and me interested in cars.  While I hung out at the golf course shagging golf balls or helping on the starting tee I would fill in the quiet times reading Rod & Custom and Car Craft.Â  I saw what the guys on the west coast were doing and imagined how cool it would be to live where cool cars seemed to be everywhere.Â  Thatâs probably how a lot of rodders got their start.

Model cars and drawing in my high school notebooks soon led to being the go-to guy if you wanted a cool car drawn on your t-shirt, or arm!Â  After I graduated high school I enrolled in The Art Institute of Pittsburgh and studied graphic design and illustration until I graduated in September of 1968.Â  For the next thirty five years I worked in the advertising industry, first as a layout artist, as it was known then, and later as an art director.Â  When I graduated A.I.P. and jot my first job, the first thing I did was purchase a 1963 split-window Corvette. Since then Iâve owned a bunch of sports cars, from Opel GTs to a Pantera, Porsches a Shelby GT350 Mustang and other nice rides.Â  But there was always the hot rod thing in the back of my mind.Â  When I first got on the internet I discovered various hot rod blogs and on-line art shows.Â  That leads us up to the present.

Iâm retired from the advertising scene these days and spend my time drawing and rendering several hot rods every week.Â  I enter artwork, not just cars; but mostly cars, in art shows and fairs. Â I do commissioned work and sell prints of my art. But the most exciting current news is, that after forty six years of waiting, I finally got a real hot rod.Â  Itâs a chopped and channeled 1929 Ford pickup. Chevy V8, slicks, mags and lots of â60 touches just like the ones I used to read about in the car magazines when I was out at the golf course back in 1964.